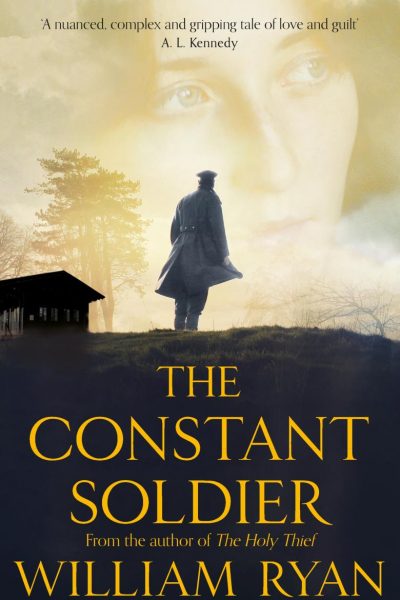 1944. Paul Brandt, a soldier in the German army, returns ed and ashamed from the bloody chaos of the Eastern front to find his village home much changed and existing in the dark shadow of an SS rest hut – a luxurious retreat for those who manage the concentration camps, run with the help of a small group of female prisoners who – against all odds – have so far survived the war.

When, by chance, Brandt glimpses one of these prisoners, he realizes that he must find a way to access the hut. For inside is the woman to whom his fate has been tied since their arrest five years before, and now he must do all he can to protect her.

But as the Russian offensive moves ever closer, the days of this rest hut and its SS inhabitants are numbered. And while hope – for Brandt and the female prisoners – grows tantalizingly close, the danger too is now greater than ever.

And, in a forest to the east, a young female Soviet tank driver awaits her orders to advance . . .

A book of great moral seriousness and a tense and grippingly atmospheric thriller, The Constant Soldier is a brilliant evocation of the price of redemption and the cost of guilt. An important book but one that reads with all the panache and skill of a thriller. Highly recommendedStav Sherez (author of The Devil’s Playground)

A gripping story of the struggle for humanity in the last days of the war. Ryan makes you think, makes you feel and makes you turn the pageMichael Ridpath (author of Where the Shadows Lie)

The Constant Soldier is a nuanced, complex and gripping tale of guilt and love that captures the chaos at the end of WWIIA.L. Kennedy (author of Costa Award Winning novel, DAY)

Shortlisted for the HWA’s Endeavour Gold Crown, the CWA’s Steel Dagger and the Irish Crime Novel of the Year.

The Constant Soldier is a nuanced, complex and gripping tale of guilt and love that captures the chaos at the end of WWII.
A.L. Kennedy

Elegaic, haunting, passionate William Ryan’s CONSTANT SOLDIER is a subtle WW2 thriller of horror and love with an utterly gripping countdown to Gotterdamerung. One of my favourites of the year.

The Constant Soldier is an extraordinary novel, with the intensity and pace of a thriller, and a wisdom and subtlety all of its own. I was gripped to the very last page.
Antonia Hodgson

Gripping . . . Ryan’s elegant, powerful prose does justice to his difficult subject matter. The Constant Soldier has the pace of a thriller with characters and themes that are nuanced and subtle.
Antonia Senior, The Times (Book of the Month)
https://www.thetimes.co.uk/article/historical-fiction-round-up-watching-murderers-at-play-bzwtmb2cs

This is a terrific novel: a tough-minded, morally probing thriller that only gains in pace, depth and authority as it goes along.
Toby Clements, The Daily Telegraph

Ryan moves up a gear in this brilliant, emotionally-charged story which combines a poignant romance with an edge-of-the-seat thriller. But what impresses most is the author’s powerful writing which blends taut action sequences with passages of soaring literary beauty … A modern classic from a master storyteller.
Pam Norfolk, Lancashire Evening Post
https://www.lep.co.uk/lifestyle/books/book-review-the-constant-soldier-by-william-ryan-1-8584247

The Constant Soldier is a beguiling blend, a spy novel-cum-historical thriller that offers a gripping but nuanced narrative set against the horrors of the absolute abuse of absolute power. It’s a bleak but rewarding novel about guilt, personal and shared, and taking responsibility for your actions, even if doing so offers no possibility of reward.
Declan Burke, The Irish Times
https://www.irishtimes.com/culture/books/the-constant-soldier-review-a-good-german-takes-on-the-nazis-1.2766949

William Ryan writes with a simple, elegant and utterly poetic style that just immerses you totally into the reading experience of it. Character study, setting, plot, everything working on every level, that is the bottom line. If that wasn’t enough he’s telling a fictional story here with its basis very firmly in fact and taking you back to a time of war, a world in turmoil, men and women living on the edge of reason and he makes it all so real and in the moment and so completely present that you could almost imagine it was happening around you right now. That is not technical writing skill that is creative genius right there . . . The story itself is emotive, thought provoking and completely engaging first page to last . . . The plot is taut and authentic, the descriptive prose practically flawless.
Liz Loves Books

Ryan has again provided readers with a complex, intense and gripping thriller; fast-paced and yet at the same time subtle and nuanced, the journey of the principal characters sweeps the reader along within a moral narrative that also calls for thought and analysis. This novel is atmospheric and engaging, sometimes bleak, definitely thought provoking, and ultimately a rewarding read.
The Lady

In this tense and subtle thriller, the central character returns from the eastern front to find himself living in the shadow of a luxurious SS retreat. It’s a masterpiece of empathetic imagination and storytelling flair.
BBC History Magazine (Historical Novel of the Year)

Ryan has produced a literary work, which, through complex yet realistic characters makes sense of the unthinkable. camp officers realise they will be judged by their enemies, is skilfully evoked. And the ending — showing a glimpse of hope, is beautifully judged.
The Irish Examiner
https://www.irishexaminer.com/lifestyle/artsfilmtv/books/william-ryans-the-constant-soldier-takes-forensic-look-at-mass-killing-431428.html

Many critics noted the superlative talent of William Ryan with his first book The Holy Thief (2010), which focused on an honest policeman in 1930s Soviet Russia. His new novel, The Constant Soldier, is more straight historical novel than crime and benefits from a strikingly characterised protagonist … It may be his most accomplished book yet.
Barry Forshaw, The Financial Times
https://www.ft.com/content/60e85090-5d81-11e6-bb77-a121aa8abd95

I can’t praise this book highly enough. Everyone should read it, including those, like me, who are wary of reading anything involving the SS. Because it isn’t really about them. It’s about love and humanity that survive even in the direst circumstances.
The Historical Novel Society Review (editor’s choice)
https://historicalnovelsociety.org/reviews/the-constant-soldier/